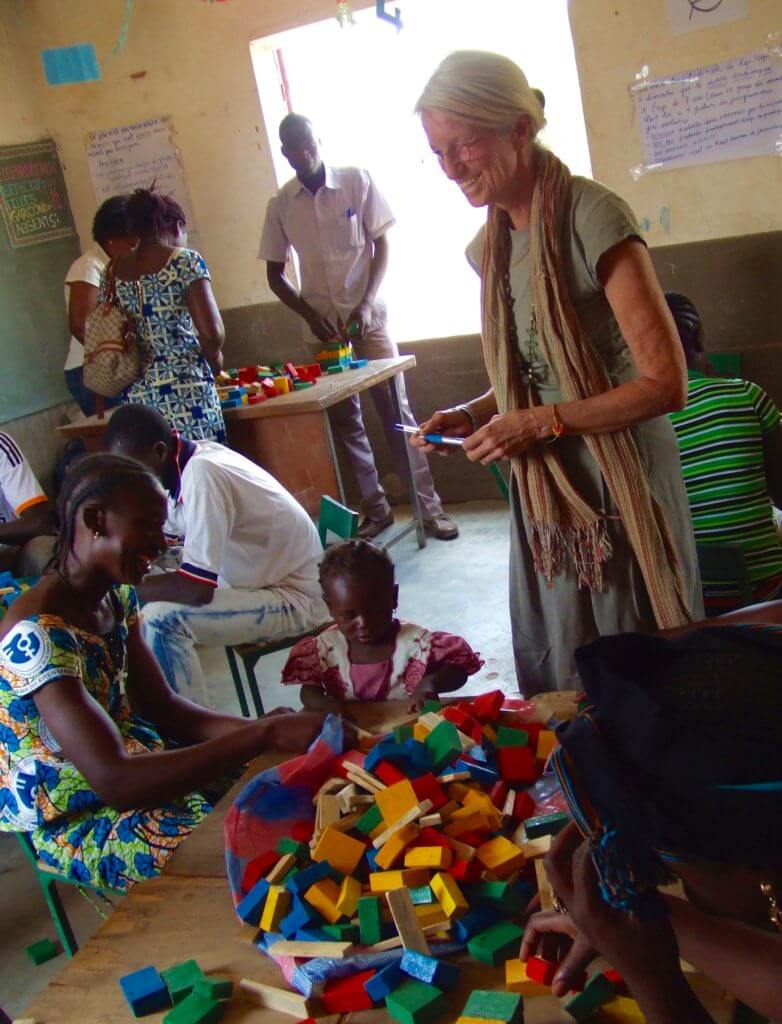 The Idea
The Building Blocks Burkina Program began as a result of a chance encounter – as has often been the case for many a successful project.

In the fall of 2010, Allyson Tache was in Burkina Faso, overseeing REPT’s original children’s home in Gaoua and with an eye open for other potential projects. She was introduced to a local educator who was working with preschools, called Bisongos. From discussions with him, Allyson came to realize that the Bisongos were struggling to provide quality care/education for the children in their charge. Being a consummate educator and a passionate advocate for young children, Allyson saw this as an opportunity – one with the potential to have a significant impact on the lives and futures of children in Burkina Faso. Her idea was, and is, to support preschools by providing them ALL with an excellent, simple, readily available, and highly effective educational tool for nursery/preschool classrooms – wooden building blocks. As well as supplying the building blocks she would train local educators and teachers on how to use this first-class educational tool effectively in order to turn their classrooms into places where children are engaged; where cognitive development, curiosity and collaboration are encouraged; and most importantly, where a lifelong love of learning would begin.

Getting Started
At the time, approximately 300 Bisongos had been built in remote rural villages through a UNICEF /Burkina Faso government initiative. The infrastructure was in place for Allyson to work with so all she needed to do was obtain buy-in from the relevant authorities in the country.

Allyson contacted the Director of the Promotion of Early Childhood Education in the Ministry of Social Action and National Solidarity of Burkina Faso – at that time Mr. Lucien Hien – to discuss her idea. Mr. Hien reacted positively and encouraged Allyson to pursue the project, promising the cooperation of his Ministry.

In February 2011, Allyson conducted the initial Pilot project in a preschool in Ouagadougou. Following that workshop, the teachers and director of the school were unanimously positive about the proposed program, as were the ministry inspectors – and thus the collaboration began. The Ministry of Education selected the Bisongos where Allyson would train and provide blocks; they contacted the provincial supervisors of the selected Bisongos who arranged for teachers to come to the training and receive blocks kits for their schools. In parallel, back in Toronto, REPT Directors officially sanctioned the program and Building Blocks Burkina was launched.